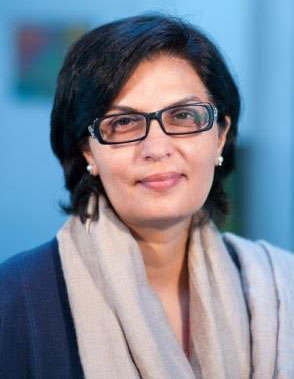 Senator Dr. Sania Nishtar is a member of the Senate (upper house of Parliament) of Pakistan. From November 2018-May 22, she served as Special Assistant of the Prime Minister of Pakistan and Federal Minister, where she held the Cabinet portfolio of Poverty Alleviation; in that role she founded and was responsible for implementing Ehsaas, the largest social protection program in the country’s history, which reached out to 15 million households and was widely acclaimed internationally. She was also the Chairperson of the Benazir Income Support Program during that time.

Dr. Nishtar is former Chair of several multilateral initiatives: WHO’s High-Level Commission on Non-communicable diseases; WEF’s Global Agenda Council on the Future of Healthcare; U.S National Academy of Sciences Global Study on the Quality of Healthcare in LMICs; UN International Institute for Global Health’s Advisory Committee; UN Secretary General’s Independent Accountability Panel for Women’s and Children’s health and WHO’s Commission on Ending Childhood Obesity. In 2017, she was Pakistan’s nominee for Director-General of the World Health Organisation and was in the final shortlist of three.

She is founder of the NGO Heartfile and has received many international awards for her work and is widely published.